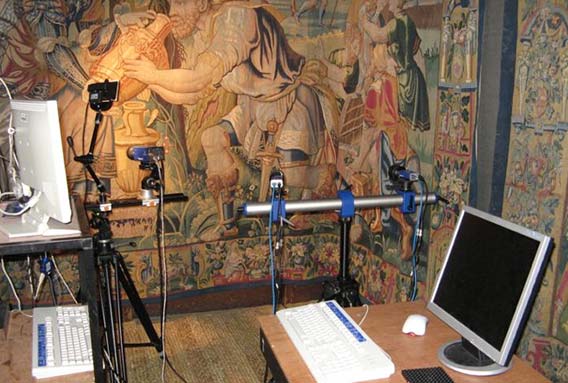 ConservationSpace evolved from discussions at workshops organized by The Andrew W. Mellon Foundation that identified the need for a system for the conservation community. A well-designed software system that would facilitate the work of conservation professionals by creating, storing and extending documents with robust metadata had been lacking in the profession.

Many institutions had adopted internally developed systems using off the shelf software solutions. Most conservation professional lack a centralized system for records management and storage. Lacking such a system limits a conservators ability to efficiently create, capture, store, and retrieve vital documentation of cultural objects and also leaves important hard copy and digital assets at risk falling victim to inadequate record preservation policies, personnel changes, accident or natural or man-made disasters. Having a document management system for conservation could solve this deficiency. In addition, robust metadata incorporated with a cultural object record and uniform computerized records management will facilitate the ability to organize and search data collectively that was once only accessible through manual inspection of individual physical files or institutional databases. The system would also open the possibility for global sharing of cultural heritage information.

Two community design workshops, held in 2009, helped to identify functional requirements for a software application that would support and manage conservation processes, documentation, and related scientific data. Sixty-four conservation professionals from the United States, Europe, and Australia—representing forty-nine institutions and organizations—participated in the two workshops. Participants in the Design Phase identified workflows for nineteen processes commonly used by conservators and conservation scientists. The next step, development of a plan for implementing some of these workflows in an actual application, began in October 2010. A planning grant from the Mellon Foundation in 2010 enabled a group of museum conservators and information technology managers to come up with functional requirements for ConservationSpace. Twenty-six individuals representing the core team, the Partner institutions, and interested individuals attended meetings held at the National Gallery of Art on November 2010 and May 2011 to discuss the scope of work and to plan a formal process for developing a proposal for building the software The group prioritized and selected the workflows to be included in the first version of ConservationSpace, identified the functional requirements for these workflows, and examined the technical framework and infrastructure needed for the initial software build phase. A formal partnership was forged among the Courtauld Institute of Art, The Denver Art Museum, Indianapolis Museum of Art, The Metropolitan Museum of Art, Statens Museum for Kunst, Yale University, and the National Gallery of Art, Washington, with the latter serving as the primary facilitator of the project.

With the award of a grant in December 2011 by the Andrew W. Mellon Foundation, work on ConservationSpace commenced in earnest. Two workshops, attended by representatives from every partner institution, were held in 2012 at the National Gallery of Art. The workshop goals were to decide on ConservationSpace’s functional requirements and write the Request for Proposals (RFP), a critical component of selecting a developer.

To assist with writing functional requirements for the RFP, the National Gallery of Art contracted Noblis, a non-profit science, technology, and strategy organization with extensive experience in building software applications. Noblis’ Enterprise Blueprinting process significantly improved the scope and quality of documents provided in the RFP, including an activity catalogue, activity blueprint, technical requirements (the interfaces), and administrative/operational requirements (user roles).

One outcome of discussions in our first workshop was a decision to also contract user experience (UX) and user interface (UI) specialist to assist with developing mockups for the RFP. Design for Context, a company that specializes in “usability and user-centered design” for software and web development was awarded a contract using grant funds. The collaborative efforts of the company and the partners yielded excellent models for the RFP..

Another step, not included in the original proposal, was the June 2012 issuance of a Call for Qualifications (CFQ) to a group of software developers. The CFQ sought to identify existing software applications that might serve as the framework for building ConservationSpace. Ten highly regarded firms quickly responded with detailed answers to all the CFQ questions. They also raised several questions that helped us refine information that was included in the RFP.

The RFP was released in October 2012 and Sirma ITT, a member of Sirma Group Holding, was selected as the developer in February 2013. Sirma Group Holding, the largest IT group in Bulgaria, was established in 1992 and has since grown into a company consisting of over 20 subsidiaries and joint ventures, specialized in various areas of information technology development. A functional version of ConservationSpace was projected to be available by June 2014. ​ Usability testing played an important role in evaluating the application during development sprints. Lucrat, a Bulgarian company that specializes in usability and human-centered design, was contracted for this process. Their work clearly demonstrated that significant improvements would be required in the UI and UX in order to encourage adoption.

The second grant from the Mellon Foundation in 2014 was provided for continuing the work of the project. A critical goal for Release 2.0 of ConservationSpace was to develop the software as a hosted multi-tenant application. In accord with Open Source requirements, Sirma developed a version of ConservationSpace that can be installed on institutional or hosted servers as a single-tenant application where a separate instance of the software is used by a single customer. Sirma created installation-ready versions that have the integration capabilities necessary for ConservationSpace’s future connectivity with third-party systems. Integration requirements for existing partner data systems were investigated and documented. Sirma developed an ontology that defines the domain of conservation business practices. Negotiations with the IIIF project allowed Sirma to expand the capabilities of the Mirador image viewer and those improvements are incorporated into ConservationSpace. They improved the user experience by enhancing the interface and interaction design.

END_OF_DOCUMENT_TOKEN_TO_BE_REPLACED

Top 10 Foundations for Museum Grants for 2019

END_OF_DOCUMENT_TOKEN_TO_BE_REPLACED

Explore our modules from first hand and see how they work in live environment. An expert from our Museum Space team will guide you and answer all your questions.